Dear friends, we have officially entered Easter time! I am sure you will be busy organising lunches, dinners and events with your loved ones. This is why I have thought of a recipe that can literally leave everyone open-mouthed:  a Charlotte with my Vicenzovo Ladyfingers, a heart of meringue and an unexpected filling of cardamom flavoured pastry cream.  An unusual, but truly scrumptious combination!

For the cardamom light cream:

For the vanilla light cream:

For the chocolate nest:

Prepare the pastry cream following the basic recipe and adding crushed cardamom pods while the milk is warming up.  Filter the milk and pour it on the mixture.  Repeat the same procedure to prepare the vanilla flavoured pastry cream. Leave to cool.

To make the two creams airier, first of all whip the cream (do not whip it to stiff peaks, but until soft). Soak the gelatine in cold water, wring it out. Put in a bowl and top 1/3 of the cardamom pastry cream with the gelatine; heat up in the microwave or baine marie until the gelatine has melted completely.

Add the mixture to the remaining pastry cream, mix well with the whisk to prevent the formation of lumps and in the end add the soft cream.  In this way, your pastry cream will be airier becoming a “bound” Chantilly thanks to the presence of gelatine.  Allow to rest 30 minutes in the refrigerator.  Repeat the procedure for the vanilla flavoured pastry cream.

Assemble the dessert fastening an acetate strip inside an 18cm diameter ring-shaped mould.  Put the meringue on the bottom and cover it with the vanilla cream.  Coarsely crumble the Vicenzovo Ladyfingers creating an even layer, douse lightly with rum syrup prepared by bringing water and sugar to the boil and adding a small glass of rum.

Use a spatula to even the layer of cardamom cream.  Allow to rest in the refrigerator for 1-2 hours.

If you want to serve the dessert on Easter, you can prepare a chocolate nest using semi sphere silicone moulds.  Melt the chocolate and cast it in the mould to create a design; allow it to solidify at room temperature. Following this procedure, if you use the mould externally, it will be easier to detach your nest.

Serve the Charlotte garnishing it with a crown of Vicenzovo Ladyfingers cut in half and decorated with chocolate, tufts of whipped cream and the nest filled with dragées. 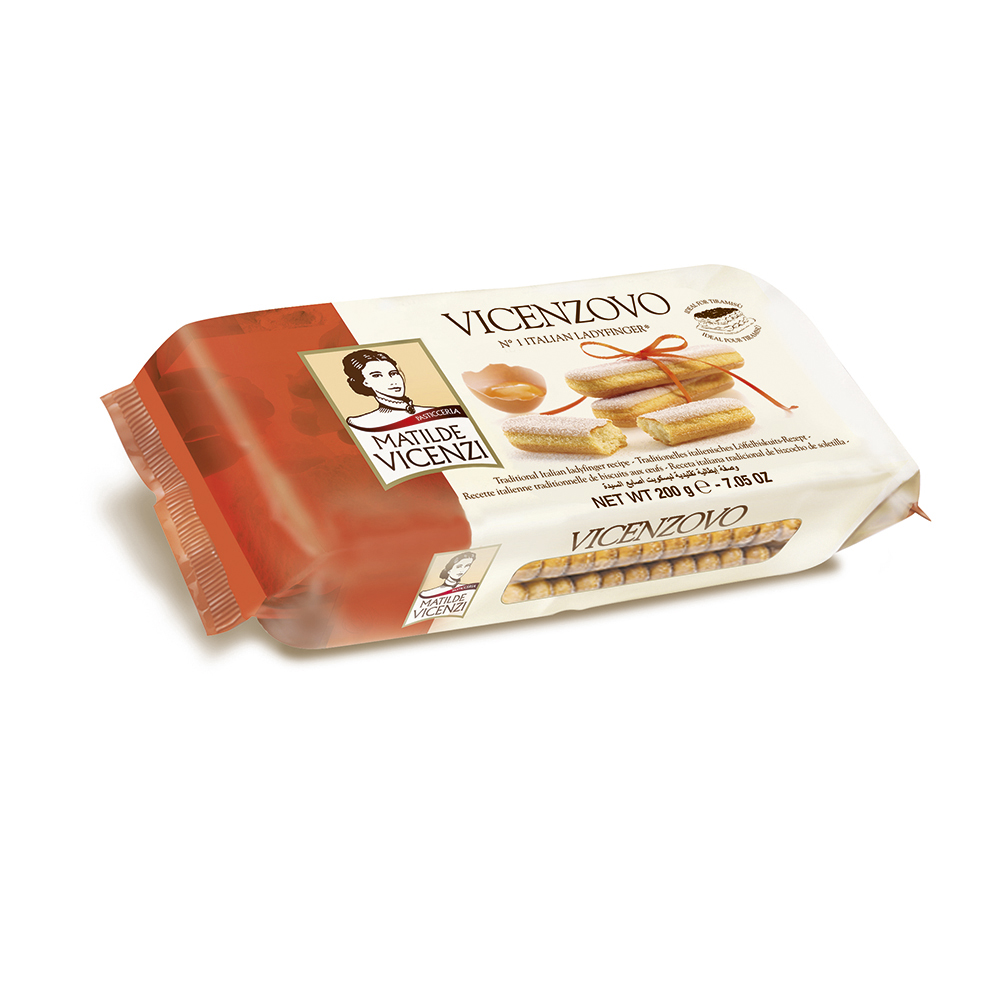 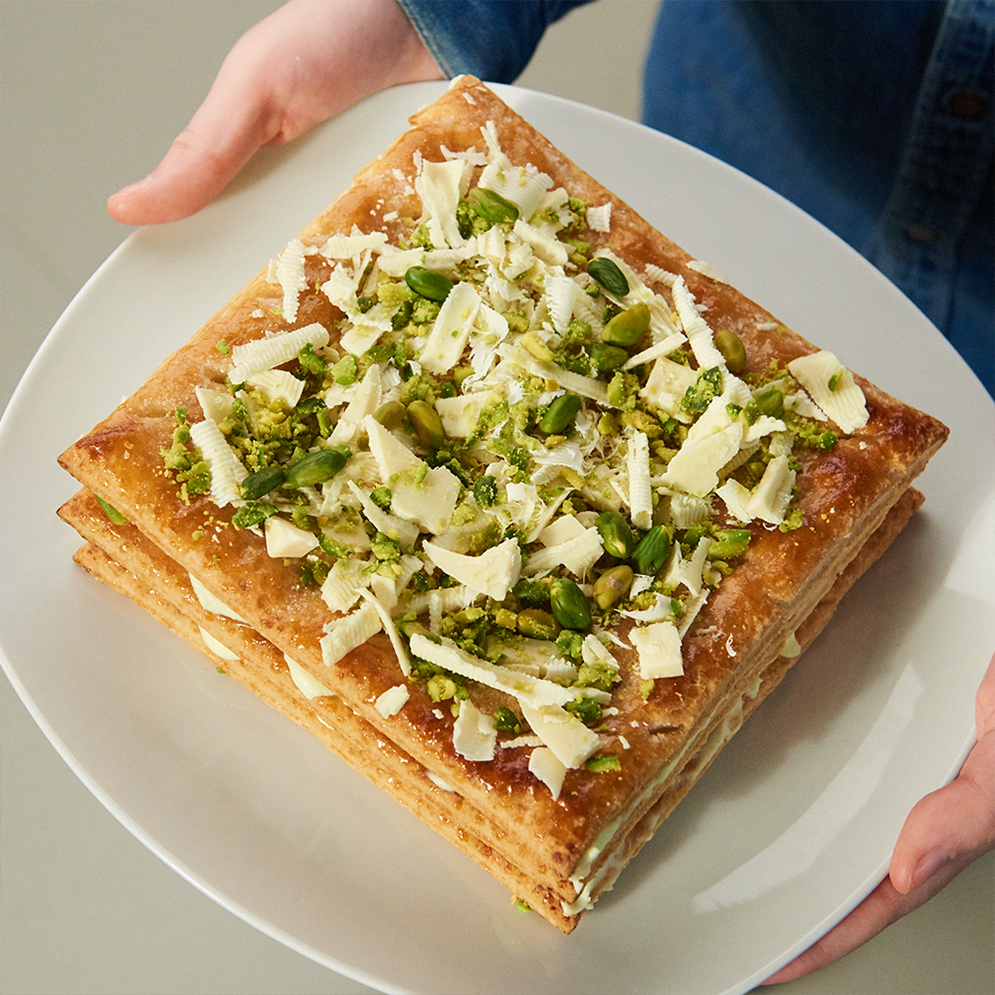 Mille-Feuille with White Chocolate and Pistachios 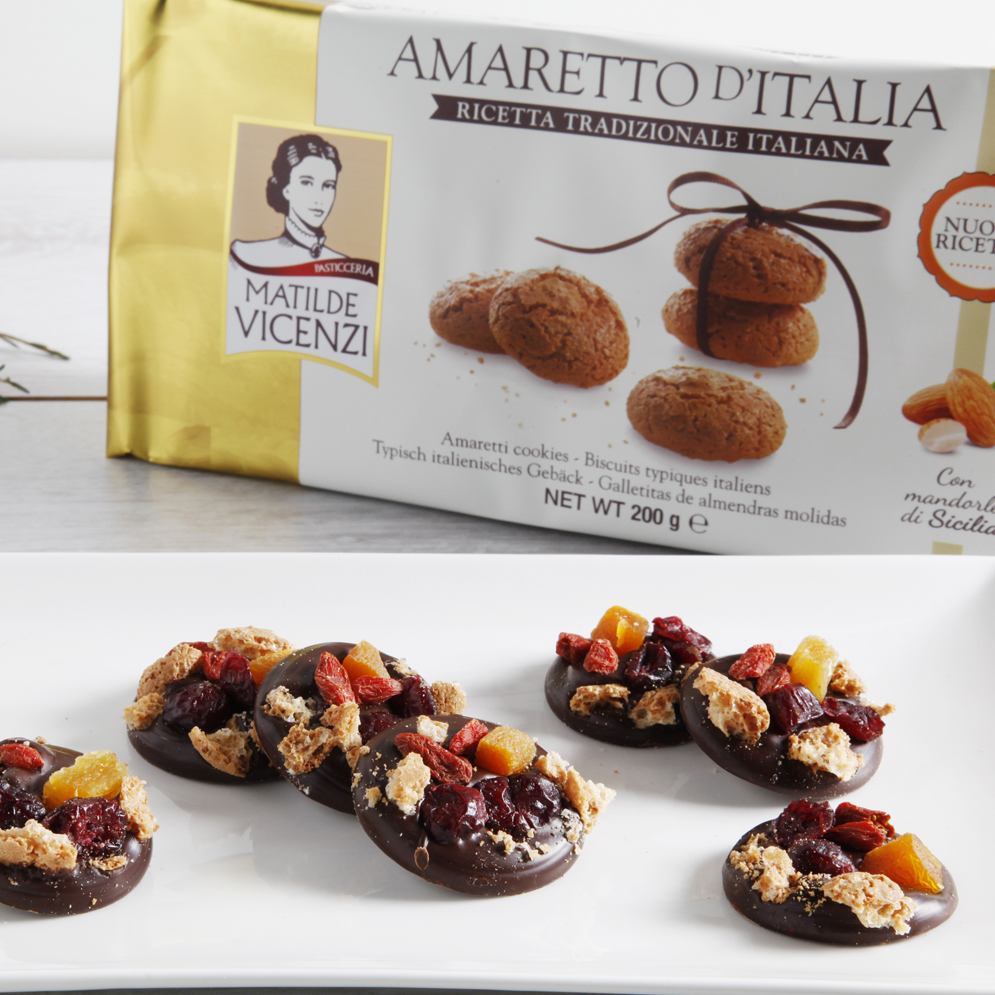 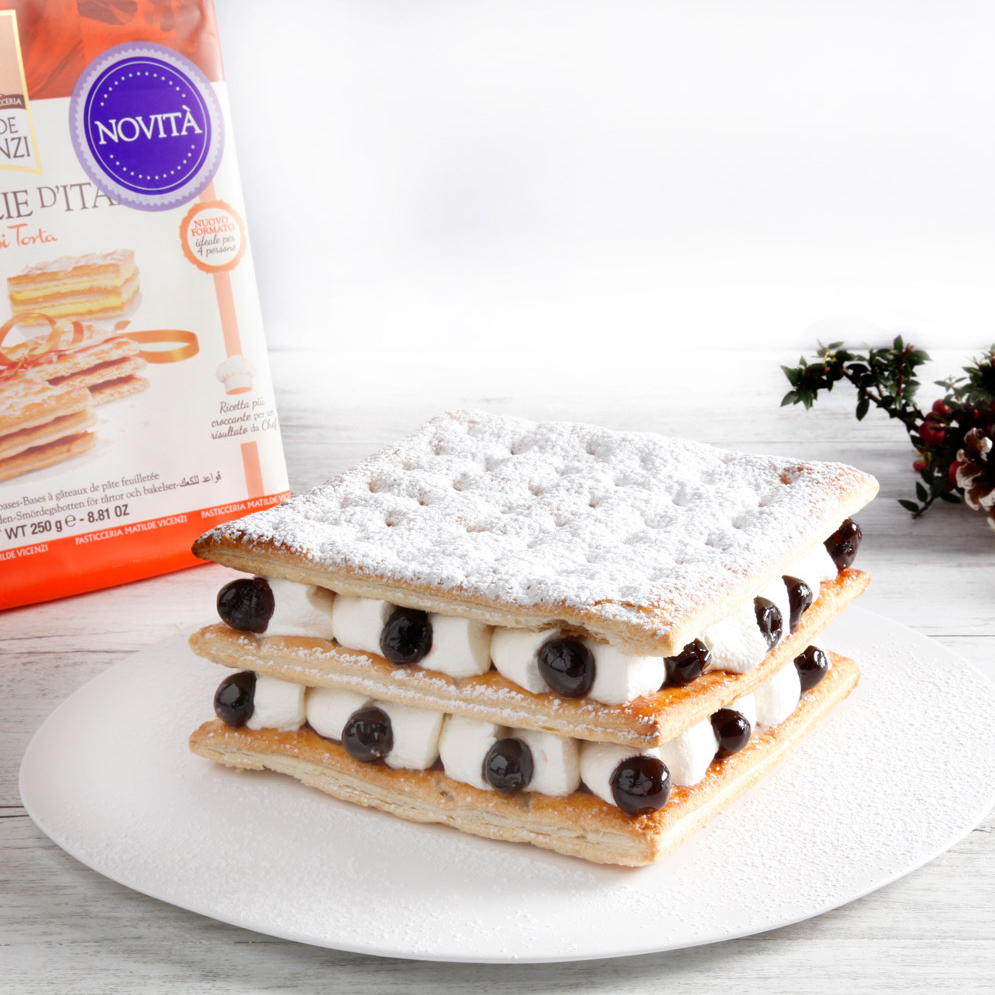 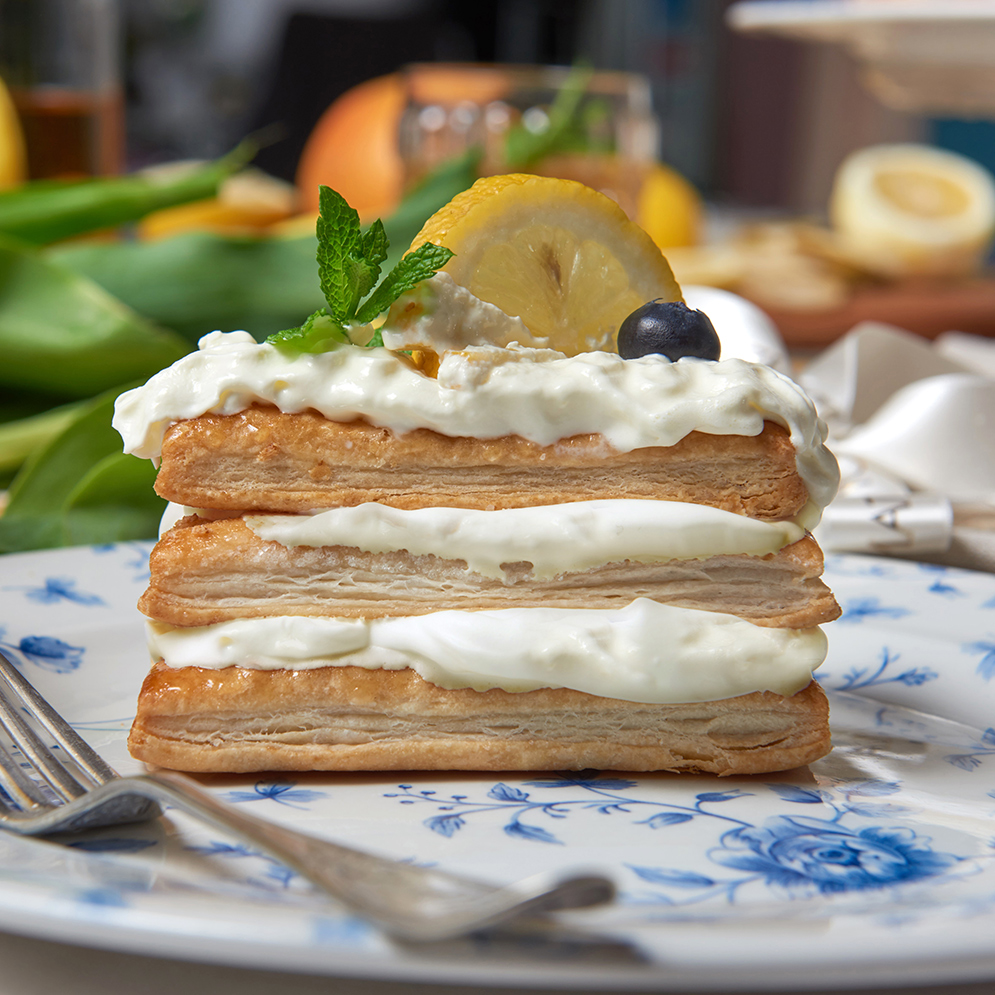 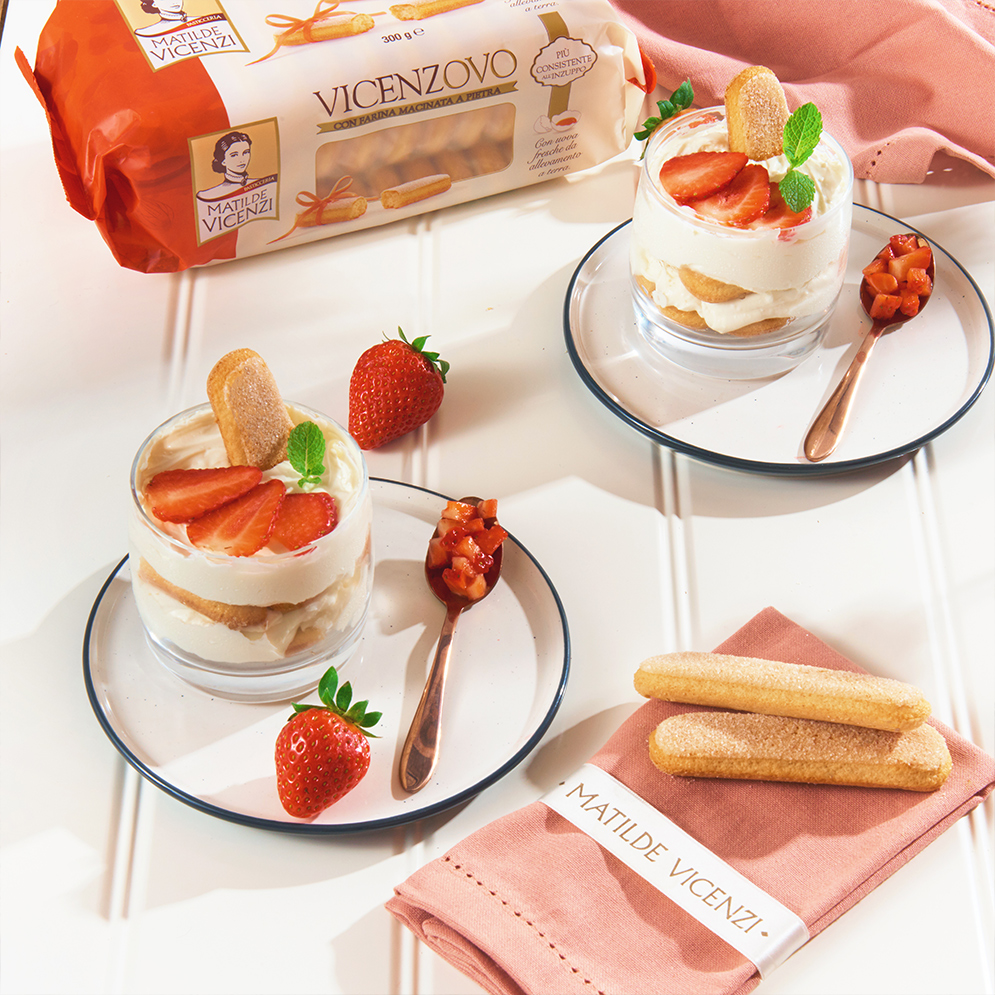 Need a dose of sweetness? Here’s the perfect tre

What do you need for a perfect Valentine’s Day?

You probably already know the recipe to make Tiram

Did you think you could only make Tiramisù with l